Music and theatrical performance have gone hand-in-hand for as long as entertainment has been a pastime for humans. Melodies paired with visuals enhance the emotions of a film and when done correctly, music can bring a film to life. By a creator tapping into our brains audio and visual sensory receptors, they have more leverage on influencing the emotions of the viewer; they have the ability to express the essence of humanity in a scene. In society fueled by over-saturation and hyper-production it is evident that we are drawn towards extremes. Whether this means staying up to date with the horrifics mind-grabbing headlines of the news, seeking adrenaline in extreme sports, or watching horror movies the media has gotten to a point of click-bait exaggeration as the standard. The monotonous nature of life with  a routine, paired with extreme emotions of grief and rage, people often crave stimulation that evokes extraordinary sensations. Oftentimes, that sensation can be found through art. America is a country founded on white supremacy and as rap music recently became the sound of the mainstream, the entertainment industry is leaning towards the portrayal of the white man’s biggest fear as its most profitable entity. Blackness has historically been villainized in an effort to oppress Black Americans, but when they reframe the “evil” characteristics placed onto them, they amplify their power tenfold. However, it seems that when this villainization escapes the confines of creative expression, artists still face the consequences of this villainization. This seems like a double edged sword.

Although rap music is not the only genre to have connection with horror, visuals and themes of horror have been powerful additions to narratives of fear and morality in hip hop since rappers began telling stories in their rhymes. Older generations constantly refer to new-age rap as “demonic” and with artists like Lil Uzi Vert, Juice Wrld, and Sleepy Hallow constantly making references to demons the devil, that characterization is difficult to deny. Additionally, controversial tragedies like that of the astroworld festival, accompany narratives of the music industry far too often. Are horrific scenes inescapable in the entertainment industry?  Although this connection is often made in reference to newer music, the connection between hip hop music and horror has historical roots. Connections between the two genres run so deep that “horror-core” is an entire sub-genre of hip hop dedicated to songs portraying dark subject matters of fear, anguish, and suspense. On one hand, horror is the perfect avenue to shed light on the harsh and oftentimes gruesome realities of life in the hood so, the horrific nature of many songs could  provide a telling look into the expression of mental issues in America — and the Black community in particular. On the other hand, I see the prevalence of horror in hip hop as a way to reclaim the villainization that black people have experienced in America since it’s construction.

Horrorcore is a sub-genre of hip hop characterized by artists, “deriving much of their lyrical inspiration from horror movies, with common themes”. Horror-core was established in the late 90’s with artists like Gravediggaz and the Geto Boys. The Gheto Boyz shaped the direction of horror inspired hip hop music with the well-known song “My Mind Playing Tricks on Me”. This track in particular shows how paranoia, drug use, and violence come together in Black communities across America. These themes are easily portrayed with visuals derived from Horror movies. Currently there are few rappers who associate with Horror-core as a sub-genre, but its influences are prevalent in countless songs and videos to this day. 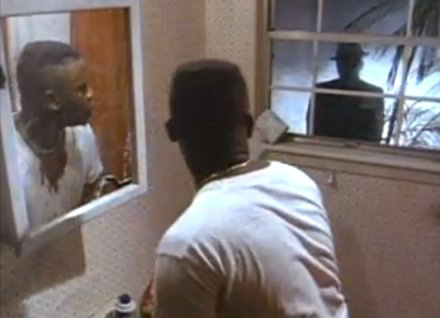 Songs that sample classic horror movies, have horror inspired visuals, and mention horrific themes in their lyrics seem to be inescapable. From classic tracks like Busta Rhymes “Gimme Some More” sampling music from the 1960 movie Psycho to newer songs like “Chill Bill” by Rob $tone sampling music from the 1968 movie Twisted Nerve the two genres have an apparent synergy. The suspenseful chords present in the music accompanying many horror films, works notably well under the array of flows and cadences used by various rappers.

The song “Monster” by Kanye West featuring Rick Ross, Nicki Minaj and Jay-Z is one track that instantly pops into my head when thinking about visual and lyrical connections between horror and hip-hop. Nicki Minaj’s iconic verse on the song is one of many where the Queen uses titles and characters from Horror movies to deliver her rhymes. “Monster” also features Nicki Minaj’s alter-ego Roman Zolanksi representing a suppressed version of herself and introducing another way that I see horror & hip-hop to connect. Alter egos are an avenue that show the expression of mental health issues in America.

There are various artists that utilize the presence of an alter ego in their music. Some of the most popular being Tupac with Makivelli, Eminem with Slim Shady, MF DOOM whose entire persona was an alter ego, Tyler the Creator with Wolf Haley and YNW Melly with Melvin. Each artist uses their alter-ego’s as an expression of their compartmentalized psyche showing the realities of the human mind in a way that is impossible to ignore. Music provides an outlet for artists to express their internal desires in a way that can be separated from who they are when they walk through the world; Their music stands alone. In 2019 only 19.2% of American adults received mental health treatment and support. This statistic coupled with the fact that 47.4% of Americans experience mental issues in their lives is a concerning comparison. The gravitation towards horrific themes in music seem to provide a brutally honest look into the average American’s psyche. What is it that we crave?

Although Halloween has come and gone, these connections seem to be imprinted in my head. Hip hop is not the only musical genre that constantly references horrific imagery. Rock and pop are also closely tied with horror. But it is not the music alone, music is frequency. The “standard” musical frequency circulated through most mainstream music is 440 Hz. Frequencies are known to impact and alter the human mind and consciousness depending on the vibration, and 440 Hz is a frequency proven to lead humans to aggression, agitation and emotional distress. Because of these connections, I can’t help but wonder if there is something else tying the music industry, and the entertainment industry as a whole,  to scenes that are most easily portrayed through horror. I wrote this article because there are only so many conversations to be had about the illuminati, the selling of souls, and group consciousness.

Trinity is a 1.5 generation Jamaican immigrant from Philadelphia. She is a multifaceted artist and writer who takes complex societal trends and communicates them through music and pop culture for easy comprehension.

New Age Afrofuturism: Using Music and Film to Reference the Past and Create a Narrative of Black Futures (issue 11)

Soulja Boy’s Impact on Fame, and Its Changing Role In An Influencer Dominated Society (issue 9)

Can I Advocate for Womxn and Still Enjoy Music Promoting Misogyny? (issue 7)

Is Hip-Hop Making the Beauty of Black and Brown Bodies More Digestible to the white Americans? (issue 6)