There are many stories about this historic midterm election. In many ways it was a continuation of the global rally-around-the-flag effect we’ve seen with Covid-19. If results in Alaska and Georgia go as expected, for the first time US voters will re-elect every incumbent Senator. Biden’s vaccination drive combined with the more infectious but less deadly omicron variant increasing US herd immunity, meant that by the 2022 election, Covid-19 was no longer a political issue. This is another core reason for the Democrats over performance: voters are without a doubt better off now than two years ago, before vaccines. Republican voters most attuned to the Trump cult are less likely to get vaccinated or vote without Trump on the ballot.

Globally, very few incumbents lost an election once they got the Covid-19 boost. The two major exceptions here are Trump and Bolsonaro. Brazil and the US are the outliers here because Bolsonaro and Trump managed the pandemic in a fascist fashion based on Reagan with AIDs: they were willing to let it spread as much as possible because it was initially more deadly to the marginalized peoples they were elected to punish. But by 2022 Republicans were more likely to die of covid due to shunning lifesaving vaccines.

Since Trump failed to lead on Covid-19, it became a decentralized policy issue among the 55 state and colonial governors. Incumbent governors benefited from the rally-around-the-flag effect of Covid-19, especially the governors of the three largest states who commanded national media attention. Even governors whose policies could be charitably labeled outright pro-covid were rewarded by the issue’s disappearance around election time. State voters re-elected Florida Governor Ron DeSantis and California Governor Gavin Newsom, both of whose every political move is done not for the benefit of these state constituents but solely to serve their monumental presidential ambitions. In Texas, Greg Abbot won a third term with his smallest victory yet despite a deadly mismanaging of the Texan power grid. Soon the time will come when Texas turns Democratic in a presidential year – Biden’s relative unpopularity with Mexican Americans for a Democrat may delay this, however. Bernie Sanders probably would have won Texas in 2020. 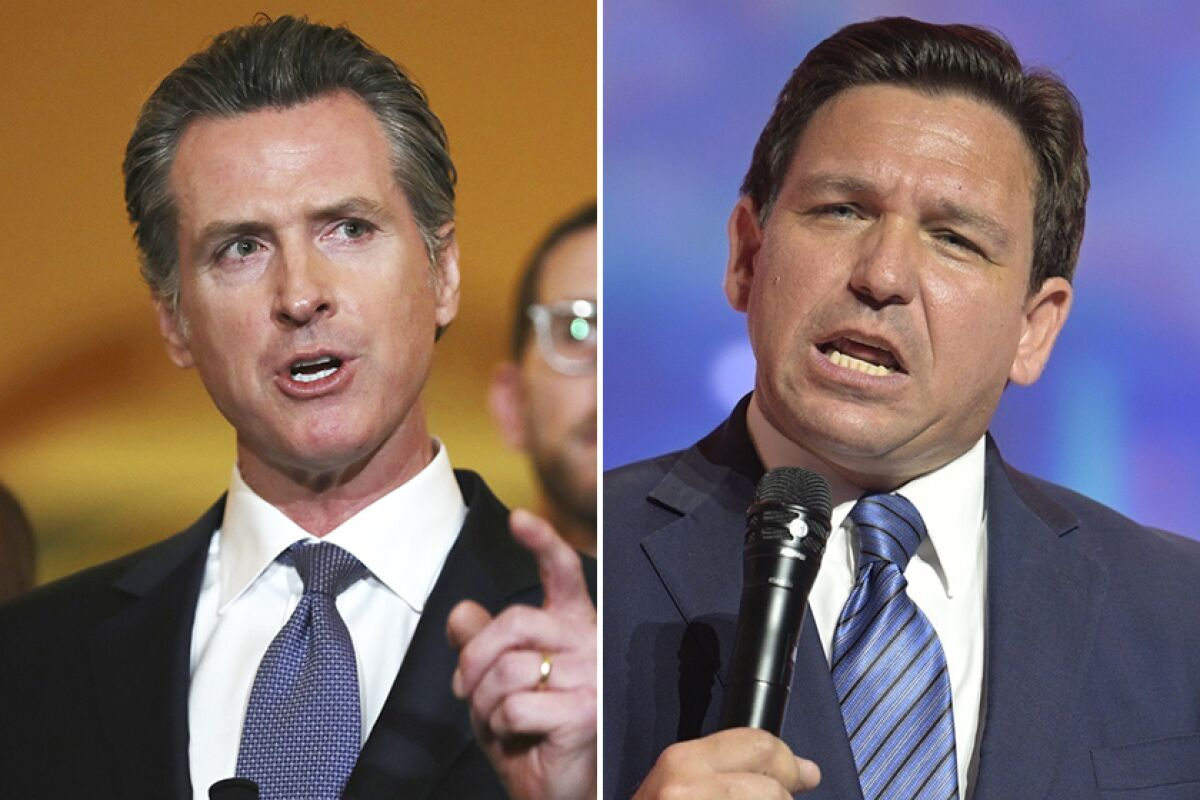 Democratic Governor Andrew Cuomo of New York, the fourth largest state, rose to unprecedented popularity at the start of the Covid-19 crisis in New York only to resign in disgrace after his past as a sexual predator was discovered. Cuomo’s successor barely campaigned, leading to disproportionate GOP gains in New York. Since the US news media is centered in New York City, this cloistering led to national pundits conflating the NY GOP’s unusually good performance with the national GOP. So, it is unsurprising how lazy media predictions of a “red wave” fizzled, in yet another episode of the US political class underestimating the resilience of President Biden and assuming Republican voters would be as energized to vote against a moderate male Democrat from the Silent Generation as they were against Secretary Clinton and President Obama. Nope.

The elections further emphasized the shift of Latino voters to the Democratic Party despite Biden’s historic weakness with the demographic compared to other US Democratic Presidents. California Republicans were fearful Trump would end up repeating their alienation of Latino and Asian voters on a national scale after Pete Wilson’s racist and xenophobic anti-immigrant reelection campaign in 1994. Nevada and Arizona swapped party governors, but both re-elected their Democratic Senators, affirming their post-Trump transition as blue states. Trump’s anti-Mexican rhetoric sealed the GOP’s fate in following the California GOP’s path. The Democrats newfound strength in Arizona, Colorado, and Nevada shows that is the case but Trump was able to use anticommunism to remain popular in Florida. Democrats continue to underestimate how effective Republican messaging is at taking advantage of those traumatized by the brutality of state socialist regimes, especially as Xi Jinping broke with post-Mao institutional norms and eliminate presidential term limits, setting himself up as a Stalinist dictator for life. Many of these voters embraced right-wing parties because it proclaims to hate communism the most. Democratic tolerances of democratic socialism are going to be as alienating to these types of voters as Trump’s racist xenophobia is to the overwhelming amount of Asian, Black, and Latino voters. This is especially true of Cuban, Venezuelan, and Vietnamese American voters. Many of these voters view Trump as the lesser of two evils based on his confrontational policies towards China.

Florida is now strongly associated with Trump, but in 2022 Florida Republicans were able to vote for Trumpism without Trump by voting for DeSantis. DeSantis’ pro-COVID policies saw a huge number of Republicans move to Florida from many states all across the country, and these transplants went on to vote for DeSantis. Ron DeSantis can boast of coattails in the House of Representatives, but only because he illegally gerrymandered away Black districts, but the Republican-dominated Court system used the racist, illegal maps anyway. DeSantis does not care if this redistricting is thrown out later because it has already served his political purpose. Meanwhile a Democratic gerrymander was struck down in New York, leading to a more competitive map there than usual. Moderate Republican Mike DeWine was re-elected in Ohio by a larger margin than DeSantis in Florida, but Democratic Congressman Tim Ryan defrayed any coattails with his losing Senate campaign. Georgians split their ticket in voting for Republican Brian Kemp, now deemed a moderate because he refused to steal the 2020 presidential election in Georgia for Trump, but the inept and scandal-plagued Republican candidate Herschel Walker seems doomed to lose a Senate runoff election to Senator Reverend Raphael Warnock in Georgia. Just like two years ago, the Trump factor will help Democrats win this race.

The only incumbent defeat during this election cycle proves the rule of Covid-19 serving as a rally-around the-flag effect because it was somewhere in Nevada. Democratic Governor Sisolak instituted a lockdown in Las Vegas. This undoubtedly saved people’s lives. People became grateful to incumbent governors for their management of the pandemic, with Democratic voters prioritizing saving people’s lives. But Vegas tourists are disproportionately from out of state, meaning when Sisolak locked down Vegas, people simply didn’t show up to the state at all. Sisolak was punished for disproportionately saving the lives of people who weren’t his constituents. Nevada Independent Founder Jon Ralston noted “When you shut down the Las Vegas Strip for two months, you crush the Nevada economy. Everything emanates from there. But Sisolak almost survived. That race is going to be within one or two points, and that’s only because of the machine.” Even after former Senate Democratic Majority Harry Reid’s death, his Nevada political machine, powered by Latino union workers denied his bete-noire Mitch McConnell’s attempt to be rewarded with Senate leadership despite McConnell’s refusal to impeach and remove Trump immediately after the deadly January 6 autogolpe attempt.

The US’ first openly gay man elected as governor, Colorado Democrat Jared Polis, was re-elected in a landslide almost equal to DeSantis’ in Florida. DeSantis’ success may be enough to get support of Republican politicians desperate for an alternative to Trump. But, given that DeSantis’ re-election was powered by the homophobic “Don’t Say Gay” law, it remains unlikely that even if he is able to defeat Trump, that DeSantis could win over important swing states such as Colorado, Nevada, or Arizona. But DeSantis remains an unconvincing candidate to take on Trump. His landslide was substantial and like Chris Christie’s landslide re-election in 2013, increased the Republican’s appeal with Latino voters following natural disasters. But it didn’t matter. Both Christie and DeSantis rose to power by embracing an East Coast macho arrogant strongman persona, but Trump so epitomizes the American strongman, that he was the basis for Biff in the 1980s’ Back to the Future 2. Christie became the first notable Republican also-ran to endorse Trump in 2016, which DeSantis seems doomed to repeat in 2024. DeSantis and Trump are already campaigning against each other. But Trump’s cult within the party remains strong enough that he will crush all who oppose him. To defeat a president a challenger must define themself in opposition to the incumbent. DeSantis is always going to be a pale imitation of Trump but without the charisma. Newsom and DeSantis both harbor dreams of the Oval Office but both are unlikely to get there. Had there been a red wave, their positions would be reversed, with the media anointing Newsom as the great white hope of the Democratic Party. Now Vice President Kamala Harris is the obvious heir apparent to Biden in 2028 while DeSantis is being perfectly positioned by Rupert Murdoch’s propaganda outlets to lose the 2024 Republican primaries to Donald Trump. The A4 protests in China show cults of personality are strong, but they can be broken by the courageous collective action of civil society. This courage against autocracy is strong in both the United States and China, but is entirely absent in the congressional US Republican Party.

Jordan Rosenberg Cobos is a historian, journalist, cartographer, and writer. He/they graduated from the Tsinghua-Johns Hopkins Dual Degree Masters in 2020 and currently lives in California.